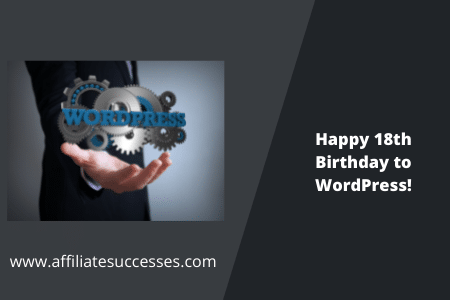 Can we say that you are now "an adult" in the world of blogging software? Yes! wholeheartedly.

Matt Mullenweg and Mike Little, built a new platform on top of b2/cafelog when it was discontinued by their main developers.

On May 27, 2003, Matt announced that the first release of WordPress was now available for download.

The community well received it.

Looking back now, they probably didn’t expect that they had started a journey that would eventually benefit millions of users around the globe, create thousands of jobs, and a whole industry of developers, designers, writers, bloggers, and web publishers would make their living off it.

From 2003 to this day, there were fixes, updates, improvements, and more.

In December 2005, WordPress 2.0 was released with a new admin dashboard. This new admin area was a complete overhaul of the administration screens in WordPress.

It was also the first release that came with Akismet anti-spam plugin pre-installed. It also came with a WordPress database backup plugin, wp-db-backup, which was then dropped in 2007.

Throughout the year new features such as shortcodes, one-click updates, and built-in plugin installation were added to WordPress with different releases.

In 2013, WordPress 3.7 came with the new automatic updates feature that allowed WordPress to automatically update your site’s software for minor releases.

By this time WordPress had already become the most popular CMS in the world.

In 2018, WordPress 5.0 was released with a brand new editing experience. They codenamed the new WordPress block editor project "Gutenberg".

In December 2020: WordPress 5.6 (aka Simone) came out with much cooler stuff than the previous ones, such as the Twenty-twenty theme, better PHP 8.0 support, and especially the enhanced editor.

The world’s biggest CMS developer is open source and free. That lets thousands of talented users help improve its performance. Anyone can contribute to fixing bugs or suggesting new features. Read more about it here: GNU Philosophy.

As a starting online marketer, you bought your domain name and web hosting, choose WordPress because it’s probably the easiest and most powerful blogging and website content management system (or CMS) in existence today.

It’s easy to use and installed within 5 minutes or fewer.

WordPress makes building a website accessible to anyone, even people who aren’t developers.

WordPress is both free and priceless at the same time.

Thanks to you over 40% of websites are alive on the internet.

WordPress is, without a doubt, the world’s most popular way to build a website.

Thank you for your time. All you have to do now is click one of the buttons below to share with people you know or leave a comment. I thank you if you do 🙂

Content Resources: It’s Not as Difficult as You Think

Does it still matter staying “above the fold”?