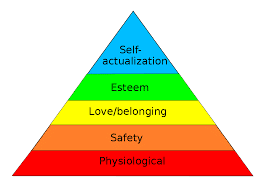 Maslow's hierarchy of needs is a theory by Abraham Maslow, which puts forward that people are motivated by five basic categories of needs: physiological, safety, love, esteem, and self-actualization.

Maslow first introduced his concept of a hierarchy of needs in his 1943 paper "A Theory of Human Motivation" and his subsequent book Motivation and Personality. 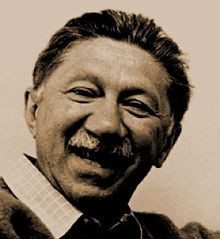 Abraham Harold Maslow (April 1, 1908–June 8, 1970) was an American psychologist who was best known for creating Maslow's hierarchy of needs, a theory of psychological health predicated on fulfilling innate human needs in priority,

Maslow was a psychology professor at Alliant International University, Brandeis University, Brooklyn College, New School for Social Research, and Columbia University. He stressed the importance of focusing on the positive qualities in people, as opposed to treating them as a "bag of symptoms"

A Review of General Psychology survey, published in 2002, ranked Maslow as the tenth most cited psychologist of the 20th century. (Source: Wikipedia)

Maslow's hierarchy of needs is a motivational theory in psychology comprising a five-tier model of human needs, often depicted as hierarchical levels within a pyramid.

We must satisfy needs lower down in the hierarchy before individuals can attend to needs higher up. From the bottom of the hierarchy upwards, the needs are: physiological, safety, love and belonging, esteem, and self-actualization. (see picture below) 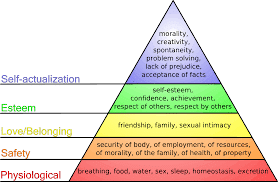 The basic physiological needs are the things vital to our survival.

The physiological needs also include such things as shelter and clothing. Maslow also included sexual reproduction in this level of the hierarchy of needs since it is essential to the survival and propagation of the species.

At the second level of Maslow’s hierarchy of needs, the needs for security and safety become primary. People want control and order in their lives, so this need for safety and security contributes largely to behaviors at this level.

The next need in the hierarchy involves feeling loved and accepted.

This need includes both romantic relationships and ties to friends and family members. It also includes our need to feel that we belong to a social group.

Importantly, this need encompasses both feeling loved and feeling love towards others to avoid problems such as loneliness, depression, and anxiety,

At the fourth level in Maslow’s hierarchy is the need for appreciation and respect.

It becomes increasingly important to gain the respect and appreciation of others. People need to accomplish things and then have their efforts recognized.

People feel confident and see their contributions and achievements as valuable and important. However, when their esteem needs are not met, they may experience what psychologist Alfred Adler called “feelings of inferiority.”

Self-actualization means feeling that we are living up to our potential.

This level of need looks different for everyone. For one person, self-actualization might involve helping other; for another person, it might involve achievements in an artistic or creative field.

Self-actualizing people are self-aware, concerned with personal growth, less concerned with the opinions of others, and interested in fulfilling their potential.

Essentially, it means feeling that we are doing what we believe we are meant to do.

The hierarchy level of your target market

When you aren’t sure about where your target market might be on the hierarchy, your marketing efforts become ineffective. It might seem like you’re pitching likely prospects, but if you’ve chosen to market to an audience in the wrong level of the hierarchy, you’ll never meet their needs.

For instance, aspiring digital marketers hoping to create a stable business and steady income would be at the second level of the hierarchy, that of security.

If you find this article informative, share it with your friends and/or leave a comment/question below

Why affiliate marketing does not work (anymore)

Have you met anyone who said they didn’t want to be successful?

Why planting trees is essential for your success.